The Language of Mathematics Functions

•A function f from one set X to another set Y is a subset of the Cartesian
product X*Y such that for any x ∈X, there is exactly one y with (x, y) ∈f .

•Suppose that f is a function whose domain and range are both subsets of R.
The graph of f is obtained by plotting each element of f as a point.
Example. The graph of f (x) = sin x

•Recall Z denotes the set of integers.
•For x, y ∈Z with y > 0, define x mod y to be the remainder on dividing x
by y.
•x mod y is always nonnegative.

•The ceiling of a number, denoted

is the least integer greater than or
equal to x. (Round up!)
•The floor of a number, denoted

is the greatest integer less than or equal
to x. (Round down!) 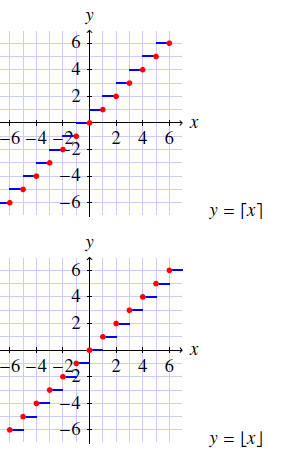 Example. 1. If X is the set of all propositions in arithmetic, then

is
a unary operator on X.

is a binary operator on

•A function f is bijective if it is both one-to-one and onto.
•Bijective functions f have inverses f-1

, called the composition of f with g.
•Perform g, then f .
•The target of g and the domain of f must agree.

Suppose we have 6 students in a computing class, with student IDs:

Suppose we now have 8 students in a computing class, with student IDs:

We may end up having a collision, i.e., two or more items trying to be placed in the same position.
We need a collision resolution policy. One simple one is simply to move to the next unoccupied
location.

Summary
You should be able to:
•Use functions and basic function terminology
•Identify functions using different methods
•Use the modulus operator and lg x
•Understand one-to-one and onto functions
•Understand and use hashing functions
•Deal with hashing collisions