Solution to Problem 1: Is it Over-Compressed or is it Modern Art?

The following MATLAB code solves parts a to e:

% Since many figures will be produced by this script, we use meaningful labels.
set(gcf,’NumberTitle’,’off’,’Name’,’Flower’); imshow (flower,[0 255]);

% Provide the error value to check against the expected value from the set.
sprintf (’With cutoff=10, the mean squared error is %.4f’, ... mean2((flower decoded).∧2))

% We need only encode the image once. After that, since we will be steadily
% increasing the threshold, we need to reconvert again more because we will be
% simply zeroing-out more elements with each iteration through the for loop
% (there is no reason to recover all the original elements and start from scratch
% each time through the loop; we can progressively drop more and more data).
encoded=blkproc (flower,[8 8],’dct2’);

% We will simply append to the vectors each time through this loop.
x=[x,nnz (encoded)];

% The next three lines can be commented out if they are not desired. They
% will produce a new window, label it, and print a representation of the
% newly decoded image for each cutoff threshold. This is for comparison
% with the original image to answer the question in the set that asks at
% which point the difference between the original image and the compressed
% image becomes perceptible to the human eye.
figure;

You should have gotten something remotely resembling the graph in Figure 1. As you can see, there
is a point where the MSE increases exponentially giving a quantitative value to the degradation of the
reconstructed picture. Medical applications such as in Xrays tend to discourage the use of JPEG or similar
lossy compression algorithms for saving images due to chances of distortion leading to an incorrect diagnosis.

The largest byte size for which I could detect the difference between the original image and the recon-
structed image by eye was 1,785 bytes, which corresponds to a cutoff of 24 and a mean square error of
42.2132. This is rather remarkable because the image started out over 16kb long, which means that less that
an eighth of the data recorded is actually necessary to create the visual effect we experience when looking
at the picture. Beyond that, the quality is not horrible, either, but we can begin to detect bands forming
due to the fact that the pixels were processed as distinct 8 × 8 blocks. By the end of the experiment, where
the cutoff is 100, the picture is not good, yet there is still enough data that it is recognizable as a flower and
shows a resemblance to the original image.

Solution to Problem 2: Compression is Fun and Easy

Solution to Problem 2, part a.

Table 1 represents the LZW analysis of the phrase “peter piper picked a peck of pickled peppers.” The
resulting data stream is:

This is 34 bytes long, whereas the original message was 46 bytes long (including the start and stop control
characters), which amounts to 26.1% compression. If we count bits, the original message could have been
sent in 7 bits per character (total 322 bits) whereas the LZW code requires 8 bits per character (total 272
bits) so the compression is 15.5%. Of course, this is a short example but contrived to make the dictionary
grow quickly. For a sizeable selection of average English text, LZW typically yields 50% compression. 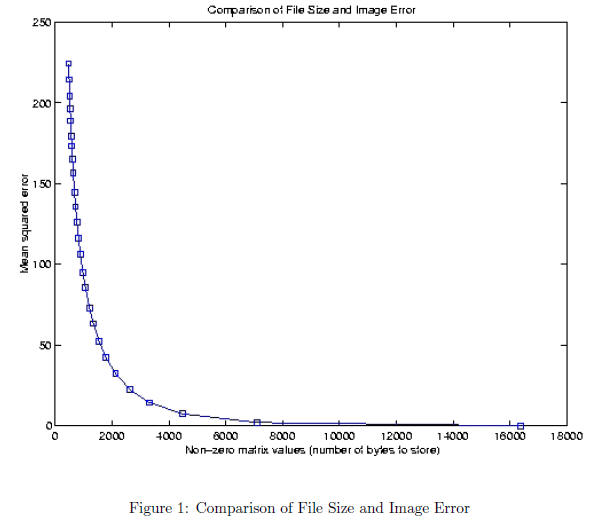 Solution to Problem 2, part b.

This strategy has several advantages: we will stay within 7-bit data, hence more compression and faster
encoder/decoder; moreover, the dictionary can be searched quickly. There is a major drawback, though.
The dictionary can only have 16 entries beyond the ASCII characters. Except for very short and repetitive
sequences of characters, the dictionary will overflow. Another drawback is that the text cannot include any
of the ASCII characters being used for the dictionary; among the characters excluded are three that are
often used (DC1, DC3, and ESC). On the other hand, the characters HEX 80 -FF would now be available
since the dictionary no longer is there, and this includes many common accented letters of Western European
languages. A practical implementation of the coder and decoder would not be either easier or harder by
very much, but new programs would have to be written because this proposed arrangement is not standard,
and new software always brings with it a cost and risk of bugs. 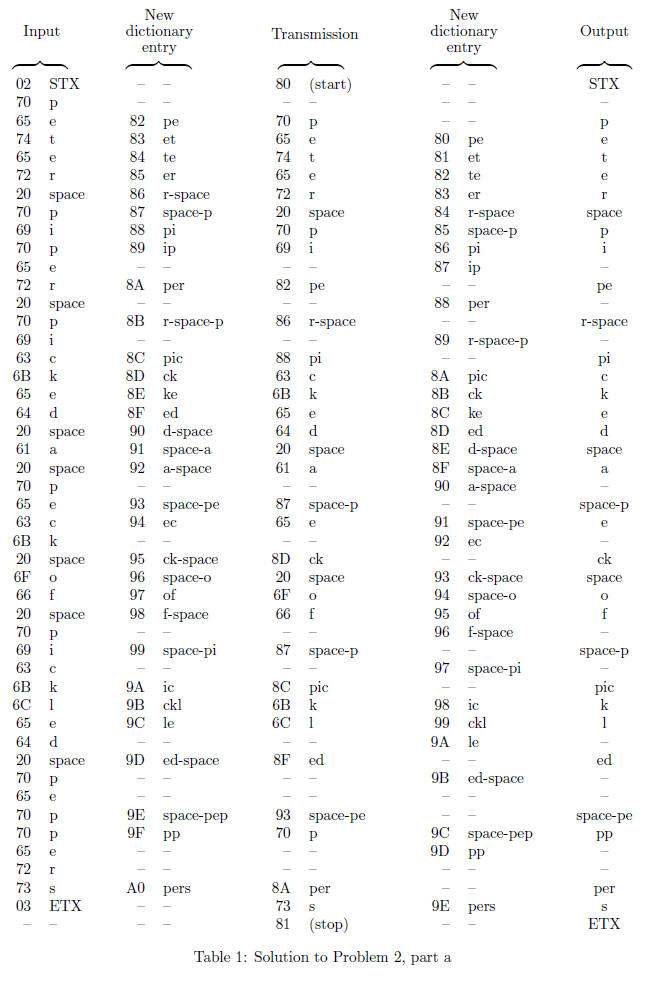