The use of a graphing calculator can be useful and convenient, especially when reducing a matrix
that has entries with many decimal places. The inverse of a matrix can also be found easily. One
of the homework assignments for MAT 119 is to reduce a matrix with a graphing calculator. Chris
Heckman will demonstrate how to perform row operations with a Casio calculator.

Two important applications with matrices in MAT 119 are solving a system of linear equations and finding
the inverse of a matrix. The Casio series of graphing calculators is able to find the inverse automatically,
but putting a matrix in reduced row echelon form has to be done manually. The purpose of this paper is to
indicate the appropriate steps.

A brief word on notation: When a box is drawn around a symbol, that means to press that key on the
Casio. Hence

means to push the multiplcation button. If two key presses are used, they will be to refer
to functions printed in different colored keys on the calcuator. The keypresses will be given, along with the
operation to be performed, the latter in slanted type and in brackets. For instance,

, and this accesses the function ex; this is in yellow ink on the Casio 9850GB+.
Also,

puts the calculator in alphabetic mode and enters the letter A in the display; these
letters are printed in red ink on the Casio 9850GB+.
Colors may vary from model to model; other versions may have a

d key instead of the

key;
and functions may be located on other keys. Consult your manual or calculator for further details.

Solving A System of Linear Equations

Suppose you want to solve the system

Here's how to solve it.

1. Enter the augmented matrix into the calculator.
Press

to bring up the main menu, then either use the arrow keys to move the cursor (the darkened
square) to MAT mode, or press the

You now see a list of matrices. A darkened line is once again your cursor; you can move it up or down
by pressing the arrow keys. When you find a place you want to put your augmented matrix into, enter the
dimensions of the matrix you want. In our case, press

NOTE. At any time, if you realize you made a mistake, you can generally go back a step by pressing the

Now you need to enter the coefficients and numbers on the right hand side. The cursor is placed in the first
row, first column of the matrix. If you type in a number (or an expression) and hit

, it will put that
number into the matrix and move to the next position, to the right (if you're not at the right-most column)
or down to the first column of the next row. After entering a number in the last row and last column, the
cursor stays there.

So we need to put in the coefficients. The keystrokes for this are

If you look at the calculator's display, you will see three boxes at the bottom, labelled R-OP, ROW, and
COL. ROW and COL are for manipulating the matrix one row or column at a time, and the R-OP is used
for performing row operations. Press the key right below it on the calculator,

You now get four other boxes, SWAP, XRW, XRW+, and RW+. These boxes are for swapping (interchanging)
two rows, multiplying a row by a number, adding a multiple of one row to another, and adding a
row to another, respectively. Pressing the keys below them

will bring up another
screen, asking for particular values, and then the row operation will be performed.

We will start by swapping the first and third rows. Press

The calculator brings up a a line at the
bottom of the screen:

and right above it is m?. The calculator is asking for the value of m, and is showing you where it will be used.
Since we want to swap the first and third rows, press

|now the calculator will ask for n

This has swapped the two rows. Now we want to divide the first row by 3, so that there is a 1 in the
upper left corner. This is what the XRW operation is for; press

now. You will now see

the Casio will round o this number
to 0.33333, which is bad, since row reduction is extremely sensative to round-o error. Instead, we will use
the Casio's capability of saving fractions exactly. Enter

), we see -1,3
in the lower right corner. This means that the entry in the first row, third column, is really

, and is being
stored that way. The approximation is only used because the matrix only has five \characters" for each entry.

. To get the exact value as an
improper fraction, press

and you now see

You need to enter k:

Now, you perform these same types of row operations over and over. The key sequences are below. 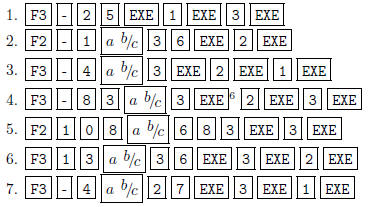 Now the matrix is in reduced row echelon form. Move the cursor to the fourth column, first row to find
the value of

, down to the second row to find

, and down again to find

Inverting a matrix can be done on the Casio without as much work; it is built-in to the calculator. Here we
will invert the matrix

1. Enter the matrix into the calculator.

This can be done as in the previous section, or you can go to the RUN MODE

and enter the
matrix there. If you are using the MAT mode, you need to choose a new matrix. Otherwise, type:

This is the matrix. Now to store it,

You should have
the following in your display:

. The Casio shows you the matrix you just entered.

if you entered the matrix the same way you did it for solving a system.
Now you can calculate the inverse by pressing

namely Mat B-1. The answer is

, after a few seconds have gone by.

Other matrix computations are possible. For instance, to find B10, type