The terms of a variable expression are the addends of the expression. Consider

a. Rewrite the expression using only addends.

d. What are factors?

e. How many factors are in the first term? List them.

f. How many factors are in the second term? List them

To evaluate a variable expression means to replace the variables
with numbers and perform all indicated operations (addition,
subtraction, multiplication, division, etc); the result will be a single
number.

Example 2 Evaluate −b^2 when

If a, b, and c are real numbers, then

Rewrite each expression using the distributive
property. Then evaluate the expression.

Example 2 Identify the property that justifies each statement

d. Any number times its reciprocal equals one.

f. The sum of any number and its additive inverse is zero.

g. The order in which two numbers are multiplied does not matter.

Example 3 Create an example that shows division does not
have the commutative property.

Example 4 Create an example that shows subtraction does not
have the associative property.

Example 5 Use the distributive property to simplify each expression.

2.2.3 Use the Properties of Multiplication to Simplify
Variable Expressions

Example 7 Use the Commutative and Associative Properties of
Multiplication to simplify each expression. 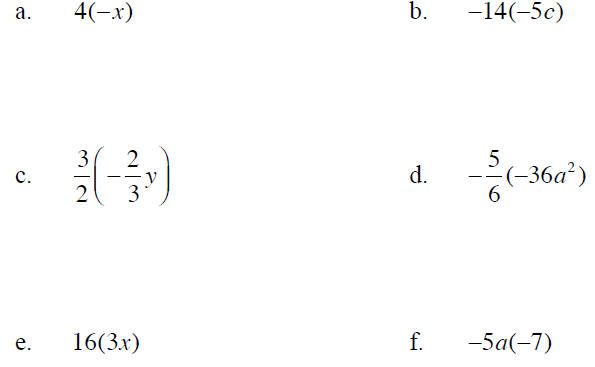 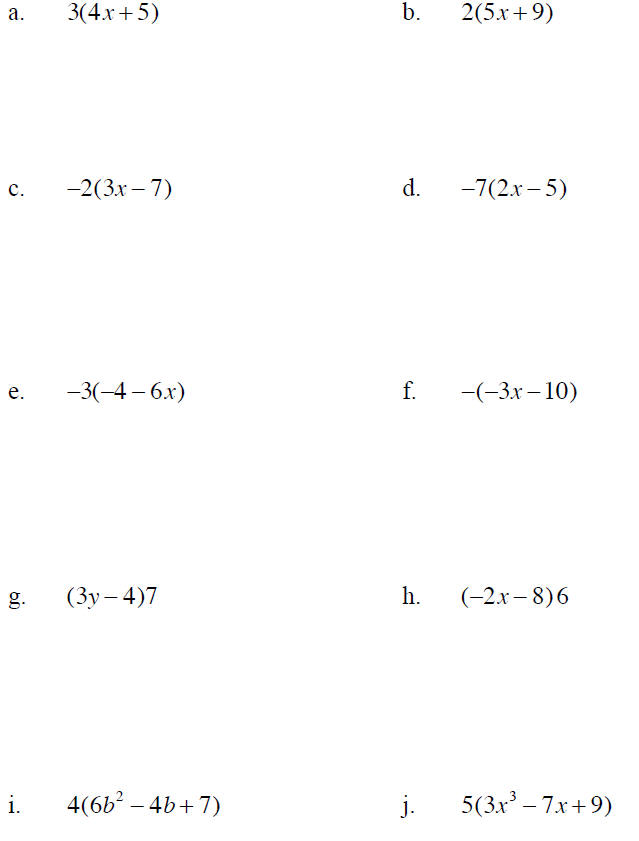 1. Use the Distributive Property to remove any grouping symbols starting from the innermost set and working outward.
2. Combine like terms.
3. Write the terms in alphabetical order with the constant term last. 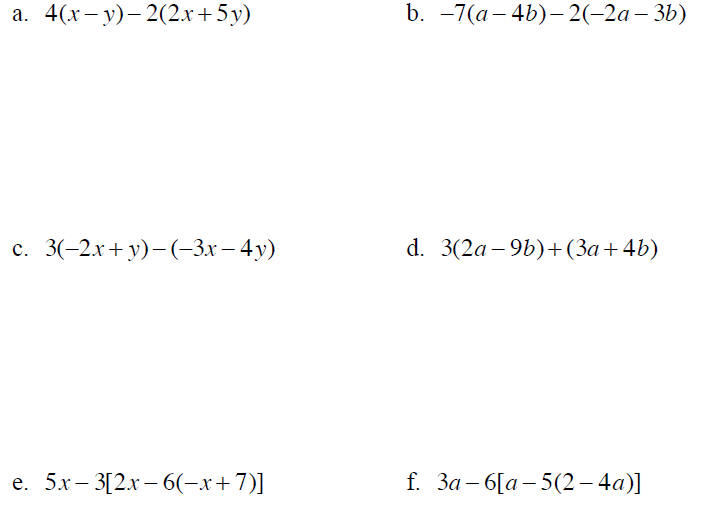 Example 1 Translate each into a variable expression.

a. The total of five times b and c.

b. Five times the total of b and c.

c. The quotient of eight less than n and fourteen.

d. Thirteen more than the sum of seven and the square of x.

e. Eighteen less than the cube of x.

g. y decreased by the sum of z and nine.

h. The difference between the square of q and the sum of r and t.

2.3.2 Translate into a variable expression

Example 2 Translate each of the following into a variable
expression.

a. Translate “a number multiplied by the total of six and the cube
of the number.”

b. Translate “a number added to the product of five and the
square of the number.”

c. Translate “the quotient of twice a number and the difference
between the number and twenty.”

d. Translate “the product of three and the sum of seven and twice
a number.”

Example 3 Translate and simplify each expression.

a. Translate and simplify “the total of four times a number and
twice the difference between the number and eight.”

b. Translate and simplify “a number minus the difference
between twice the number and seventeen.”

c. Translate and simplify “the difference between five eighths of
a number and two thirds of the number.”

d. Translate and simplify “the sum of three fourths of a number
and one fifth of the number.”

Example 4
For each of the following define a variable and
express all unknown quantities in terms of that
variable.

a. The length of a swimming pool is 20 feet longer than the
width. Express the length of the pool in terms of the width.

c. A guitar string 6 ft long was cut into two pieces. Use one
variable to express the lengths of the two pieces.

d. If the sum of two numbers is 10. Use one variable to express
each number.

e. An investor divided $5000 into two accounts, one a mutual
fund and the other a money market fund. Use one variable to
express the amounts invested in each account.